GOED promotes the consumption of EPA and DHA omega-3s, which are available from a variety of sources. The vast majority come from marine sources including fatty or oily fish, fish body or liver oils, marine crustaceans such as krill, marine microorganisms such as algae, or, more recently, several terrestrial plants that have been genetically modified to produce EPA and DHA. Overall, seafood is the best way to consume EPA and DHA simply because of all the other nutrients that are part of the fish. High omega-3 choices include salmon, tuna, mackerel, and pollock. Smaller-bodied forage fish species are also a high source of EPA and DHA. This category includes sardines, anchovies, herring, mackerel, capelin, and hoki. Most government recommendations suggest consuming 2-3 servings of fatty fish per week to achieve 250 mg of EPA and DHA per day. Supplementation is a key way to consume enough EPA and DHA to benefit your health. Supplements are made from many different marine sources and all are equally valuable in terms of providing EPA and DHA, so it’s personal preference which you choose.

Anchovy is the primary oil provided in omega-3 supplements from a number of different fisheries throughout the world, including Peru, Chile, Morocco, and Turkey.

Cod liver oil supplements were one of the first commercially sold omega-3 dietary supplements in the modern marketplace and were originally sold for the vitamin content rather than EPA and DHA but remain a popular source of omega-3s.

Pollock oil is mostly extracted from the livers of pollock caught in Alaska.

Salmon by-products can be cold-pressed to make “virgin” or minimally processed salmon oils that preserve some nutrients lost in traditional processing.

Tuna oils are typically made from the by-products of skipjack and yellowfin tuna (not the more controversial bluefin tuna) and are often used to fortify infant formulas because of their high DHA content.

Oils made from the roe of different fish such as herring are also available in dietary supplements.

Supplements made from krill — tiny crustaceans from the waters of the Antarctic — provide a phospholipid source of EPA and DHA and are generally available in a smaller pill.

There is also a small but growing market for EPA and DHA supplements made from calanus, a small crustacean from the Arctic.

Some supplements use oil made from the by-products of the squid meat production industry, which is relatively high in DHA.

New Zealand’s green-shelled mussels also contain EPA and DHA and are being used in supplements.

While an algae oil containing DHA has been on the market for decades, only recently have additional algae sources been commercialized. There are now options for EPA from algae, additional sources of DHA from algae and combinations of the two with different levels of EPA and DHA content. Omega-3 algae sources should not be confused with other algae like spirulina or chlorella.

These two plants are terrestrial plants that have been modified to express EPA and DHA. Both are currently in agricultural trials in different countries, and initial commercial products will focus on aquaculture. Some consumers prefer to get EPA and DHA from non-seafood or non-supplement food sources.

EPA and DHA oils can be added to dairy products, like milks and butter- or margarine-based spreads.

Egg producers can feed EPA and DHA meal to chickens to raise the EPA and DHA content of their eggs.

What about walnuts, chia, and flax? 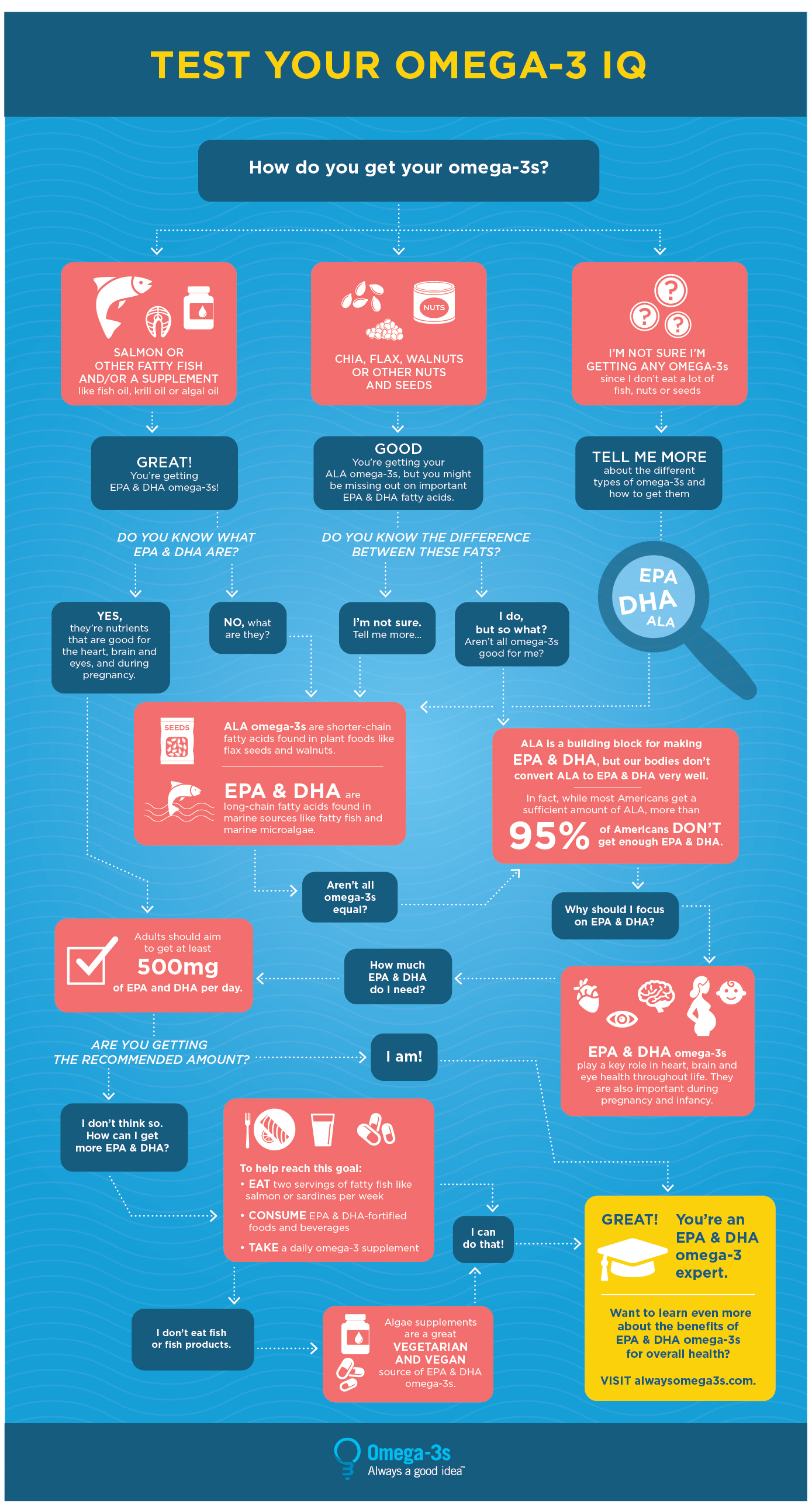 Walnuts, chia, flax, and other plants are sources of ALA omega-3, not EPA and DHA omega-3s. ALA is an important nutrient, but it's no replacement for EPA and DHA, and many people get enough ALA in their diets without much effort. Click on the infographic at the left to learn more.